Just in case you haven’t visited our series before, let me tell you a little about A Great Nephew & A Great Aunt. My great nephew, Landon (a fifth-grader) and I (his great aunt) collaborate. I write a poem which he illustrates. We started this collaboration last fall and have had so much fun with it that we decided to invite others along. Landon and I will continue to have a new episode on the second Friday of each month. The other Fridays are filling up quickly with guests.

Today our guest collaborators are . . .

You know that age-old question-Which came first—the chicken or the egg? A version of that applies to our series. Which came first—the poem or the picture? So far in our series the poem has come first and a poem-inspired drawing has followed. But today, it’s the opposite. Jeff sent David a photograph and a photograph-inspired poem followed. Let’s hear about this from David (paraphrased).

This beautiful photograph taken by our son Jeff Harrison. He was sitting alone on a dock on the Nehalem River along Oregon’s west coast. In his own words,

“I have a chair, a Volker with beer, and a bag of peanuts. A shaggy dog is staring at me intently, hoping he has better luck than the gulls at getting another peanut or two. There are seabirds chattering everywhere, fighting for scraps. It’s cool and grey, with a foggy mist around the mountains. My crab pot is tied off next to me. It sure reminds me of Crabbing in Pensacola off of the bridge. Why can even happy memories make you sad?”

I love this picture and was moved by Jeff’s description of the moment and how he was feeling. With his permission I wrote a poem to go with it.  Thanks, Son. I love you.

And since the photograph came first, that is where we will start today. 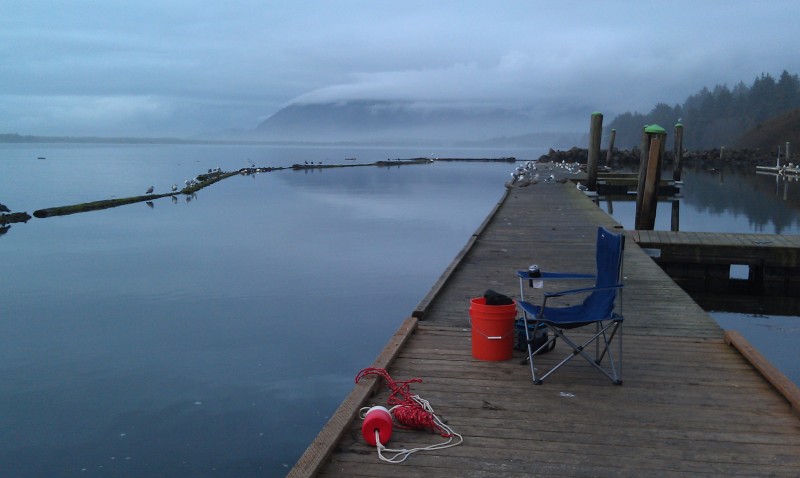 Here are David and Jeff spending time together in Alaska.

Thank you for being our guests, David and Jeff. And thanks to our readers for following this series. You can learn more about David and Jeff below. See you next time!

Meet David: David L. Harrison has published eighty-nine books of poetry, fiction, and nonfiction for young readers and educational books for teachers. He is poet laureate of Drury University and David Harrison Elementary School is named for him. His work has been anthologized in more than 120 books, translated into twelve languages, sandblasted in a library sidewalk, painted on a bookmobile, and presented on television, radio, podcast, and video stream. Let’s Write This Week with David Harrison is a 20-episode video program that brings writing tips into elementary classrooms and offers graduate college credit for teachers. David has given keynote talks, college commencement addresses, and been featured at hundreds of conferences, workshops, literature festivals, and schools across America. He holds degrees from Drury and Emory universities. Two universities have presented him with honorary doctorates of letters. His poetry collection, Pirates, represented Missouri at the 2013 National Book Fair in Washington, D.C.
You can find David here:
David’s Website
David’s Blog
David’s Facebook

I have created a page on my website to view all the episodes of A Great Nephew & A Great Aunt. Click HERE to visit the page and enjoy past episodes.

68 thoughts on “A Great Nephew & A Great Aunt: Guests-David and Jeff Harrison”